The Juan Díaz River extends some 322 sq km and is composed of several medium- and small-sized rivers covering part of Panama and San Miguelito Districts. The river flows through mudflats and mangroves that are critically important ecosystems that provide protection for coastal communities, support incredible amounts of biodiversity, buoy local fishing and ecotourism industries, and even sequester carbon. Panama Bay is an important and critical ecosystem for biodiversity and related socioeconomic activities including fishing and ecotourism. Every year, nearly 1000 humpback whales visit the protected Panama Bay to nurse their young, and it is a critical stopover site for more than 20 species of migratory shorebirds and as many as two million individuals.

Approximately 614,695 people live in its watershed, many living in informal low-income communities, with non-optimal waste collection systems. Although in its upper region there are still areas with abundant vegetation, the basin is undergoing an accelerated urbanization process, currently covering an area of 22% of the total basin area. Mangroves that grow by the river bank act as a natural barrier, trapping the litter and causing the water to stagnate which reduces the health of the ecosystem and threatens the survival of all that depends on it. Juan Díaz River is one of the seven rivers in Panama City that contribute to discharge 102,299 tons of land-generated marine debris annually into Panama Bay.

Marea Verde will install a waste capture system in the Juan Díaz River, with the aim of preventing plastics from entering the Panama Bay. The system is based on the Water Wheel-Powered Trash Interceptor, better known as “Trash Wheel”, first created by Clearwater Mills in Baltimore, US, as a groundbreaking innovation in the growing effort to control stormwater trash and debris. Marea Verde will develop a system based on the Trash Wheel but adapted to fit the unique environmental conditions of the Juan Díaz River. Therefore, transferring the debris directly onto shore at the capture site is the most appropriate approach for this location. The new design (“Doña Rueda” or “Ms. Wheel”) will incorporate a transverse conveyor system, eliminating the need for a separate dumpster barge. By continuously removing the debris with the Trash Wheel, the capture rate will be improved, and labor requirements will be greatly reduced. A water wheel provides mechanical power for the conveyor from the river current and solar power pumps. The trash will be lifted by the conveyor and deposited into a container, and then conveyed via a transverse conveyor directly to a shore side dumpster.

Since 2017, Marea Verde has worked successfully with lawmakers on a law that incorporates recyclable materials, including plastics, in asphalt mix in lieu of a percentage of gravel. Other potential uses for the river plastics include pyrolysis to create energy using cement plant chimneys, generation of biofuels through gasification, and conversion of garbage to inert materials that can be used for construction bricks.

Marea Verde is focusing on creating awareness about the Trash Wheel and reducing waste in the Juan Díaz River watershed, using a three-pronged approach:

Marea Verde is a non-profit organization formed in 2017 that focuses on creating awareness and taking action on mitigating pollution from solid waste in the rivers and coasts of Panama. They have developed clean-up initiatives in the Matías Hernández River, and have implemented education campaigns with local schools and awareness campaigns for sustainable alternatives for solid waste management. Marea Verde has also intervened in the clean up and restoration of the mangrove area in Costa del Este with the BoB (Barrera o Basura) low-cost capture system. Redoxigen (Wisy Inc.) is a US-Panama-based initiative that consists of a digital platform that uses computer vision to recognize images and text, and integrates AI, mobile technologies and behavioral design to facilitate efficient operational management. With the support of Carnegie Mellon University, they are using AI to categorize plastic trash as it moves along the conveyors. Clearwater Mills is a sustainable environmental technologies company based in Baltimore, Maryland, US, and will help with engineering the Trash Wheel. 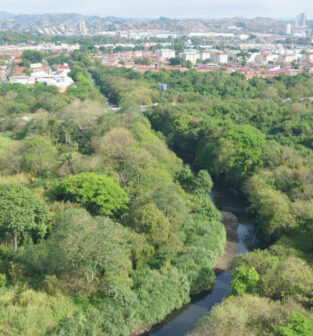