The Portoviejo River flows over 100 kilometers and discharges directly into the Pacific Ocean off the southern coast of Ecuador. The river originates in the Santa Ana municipality and feeds the valley of the Manabí Province, supplying water to over 53% of its urban and rural population. The river supports the Tumbes-Chocó-Magdalena biodiversity hotspot, which fosters mangrove and dry woods ecosystems. It is a lifeline to some of the poorest communities in the country and is an important source of water and natural heritage.

Manabí’s ecosystems are under intense pressure due to human activities such as land use change, intensive agriculture, and mismanaged waste. Each day, over 1,000 tons of waste is produced in Manabí, where inefficient open-sky dumps and pop-up cells are the primary form of waste management infrastructure. Waste collection services reach 90% of the urban areas in this region, meanwhile only 60% of rural areas are covered. For the communities that do not have access to waste collection, it is common practice to dump all waste into the river. These conditions have diminished the Portoviejo River’s ecosystem services and exposed its flora, fauna, and human populations to the adverse effects of pollution.

Ichthion Limited is working to remediate these conditions and prevent further plastic pollution from reaching the Portoviejo River.

Ichthion Limited is using their state-of-the-art Azure System to remove plastic waste from the Portoviejo River. The system consists of a floating barrier and mechanical conveyor belt that combines the latest research on fluvial pollution with passive fluid dynamics, probabilistic modeling, and material transport. The Azure barrier consists of a floating curtain that moves with the tidal range of a river, directing intercepted waste to an extraction point, and is designed to avoid the aggregation of physical material within the river channel. The barrier is permeable, preventing upstream-downstream pressure imbalance. The target depth of the barrier allows fluvial fauna to pass under it and minimizes the number of microscopic organisms trapped in the barrier.

At the extraction point, the waste is transported to shore aboard a mechanical conveyor belt where it is processed, sorted, and weighed. Locally-recyclable materials including polystyrene (PS), polyethylene terephthalate (PET), high-density polyethylene (HDPE), and low-density polyethylene (LDPE) are delivered to processing facilities. Optimizing the collection of plastics and their value chain plays an important role in the project’s strategy. Ichthion is also working with existing waste miners associations where up to 75% are female recyclers, promoting financial inclusion.

The Ichthion team is also developing an object recognition artificial intelligence (AI) system to classify and measure the plastic waste as it is conveyed out of the river. The data generated by the project is being used to inform evidence-based decision and policy making at the local, regional, and national levels.

Ichthion is implementing a communications and community engagement plan focused on awareness, education, and behavior surrounding plastic production, use, and disposal. Their data-backed communications strategy leverages social and traditional media to engage industry, government, and the general public to generate better policy making and industry transformation. Locally, Ichthion is hosting river clean ups, educational workshops at schools, and events such as movie nights to involve the community and inspire behavior changes. Along the Portoviejo River, they are also restoring common dump sites to green spaces and providing proper waste management infrastructure.

Ichthion promotes a systemic change to stop and prevent the flow of plastic reaching the oceans. It is focused on supporting equal access to a clean and healthy environment improving the quality of life for the inhabitants of El Milagro community in Portoviejo, an underserved rural community on the coast of Ecuador. Ichthion has identified the opportunity to generate a positive impact through the creation of a baseline for inclusive recycling and good waste management practices in the community, creating partnerships to set the foundation of inclusive recycling and meaningful employment in the area. Therefore, Ichthion promotes an inclusive solution to reduce inequity by working with waste pickers to increase the volume of the plastic collected by the Azure technology and acquire the plastic collected by them at a fair price. Ichthion also promotes responsible consumption through water stations and refillable bottles.

Ichthion Limited is a multi-award winning company born out of the laboratories of Imperial College London. They seek to overcome the limitations of existing technologies by delivering the first truly scalable solutions to reduce the flow of plastics into the world’s oceans. Ichthion develops energy-generative systems that uniquely can be installed in rivers, coastal areas, and the oceans to remove plastic waste and generate data.

Interested in supporting Ichthion’s work in Ecuador? Donate to their foundation here 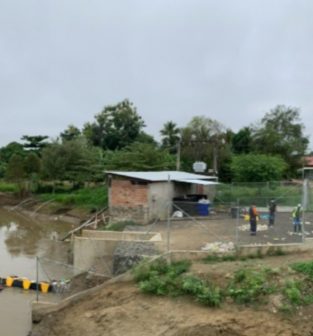 The Route Towards a Healthier Portoviejo River 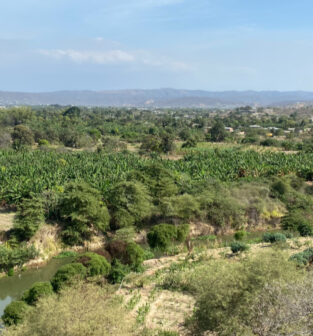 Getting Acquainted with the Portoviejo River