The Citarum River is the longest river in West Java, Indonesia. According to archaeological records and artifacts, human civilizations have flourished here dating back before the 4th century BCE. Today, over 5 million people live in the river basin, and the river itself provides water, electricity, and irrigation for more than 25 million people.

Sadly, the Citarum River is also known as the “world’s most polluted river.” In some places, the water is invisible because the river’s entire surface is covered by waste, including plastics and other forms of pollution (lead, aluminum, manganese, iron) coming from a variety of sources like households and textile industries. Cleaning the Citarum River has become a priority from the local and national government. In 2011, the Indonesian government began a river revitalization project, aiming to return the whole river to clean drinking water status. It is estimated that a clean Citarum River will bring over USD$280 million a year in benefits. To address the limited waste management infrastructure in and around Jakarta, officials plan the construction of four Intermediate Treatment Facilities (ITFs) to process waste into electricity. However, concerns have been raised that these developments might further jeopardize the health of local residents and source of income for local waste pickers, because of increased air pollution and the elimination of waste that is valuable for collection

Greeneration Foundation plans to install a plastic capture system in the Citarum River near Bandung, the capital of West Java, which is infamous for the amount of waste that accumulates before the Saguling Dam Intake. The system, created by Riverrecycle, consists of active concentration modules placed along the river to guide the plastic and other waste to one side, followed by an automatic collection wheel that lifts the waste out of the river. The system is designed to capture on average 20-100 t of waste per day.

The project aims to create value from the collected waste in the Citarum River. Waste collected from the river will be transported to Bening Saguling Foundation TPS 3R, partner of Waste4Change, at a site located near the Saguling Dam Intake collection site. The waste will be sorted and processed according to type: recyclables, non-recyclable plastics, organics, residue, and bulky waste. Recyclables will be sold to recyclers, and organics will be composted. Non-recyclable plastics will be processed in a pyrolysis test unit to be converted into low sulfur fuel oil, the sale of which is envisaged to create a revenue stream for the long term sustainability of the project. Other residual waste will be transported to a nearby biomass facility operated by Indonesia Power.

The project’s communications strategy has three primary messages: 1) the dangers of plastic pollution, 2) the local urgency and extent of the problem based on data and key findings from the plastic capture system, and 3) strategies for improving waste management practices for eliminating the problem at its source. Outreach is tailored to three primary audiences: government, local communities along the river, and the general public. The team will conduct meetings and focus group discussions with government officials to share baseline and progress data to raise awareness of the problem and encourage the enforcement of existing regulations and development of new regulations regarding waste management in the region. In reaching out to the local communities, the team is holding a series of small group workshops with active involvement from community leaders to raise awareness and build waste management capacity, tailored to the existing knowledge and attitudes of the participants. Greeneration Foundation is also leveraging its online platform, bebassampah.id, to educate the general public and make accessible maps of waste management facilities near the Citarum River. These maps are is expected to be a reference for community outreach intended to encourage the surrounding community to directly distribute their waste to the facility.

Greeneration Foundation is an NGO based in Bandung, Indonesia, focused on utilizing adaptive creative media in changing human behavior to implement Sustainable Consumption and Production in Indonesia. Greeneration’s activities involve engaging with government, environmental organizations, and communities, while also connecting to the broader community. Riverrecycle is a Helsinki, Finland-based company with several offices in Southeast Asia that will act as technical and coordination experts on the project. They have innovated the river plastic capture device as well as the “River cleaning as a free service” business model. Waste4Change are waste management experts operating in Indonesia and will oversee the project operation and data collection. Deltares is a Netherlands-based independent institute for applied environmental research that will provide insights on river site identification, data collection, and analysis. 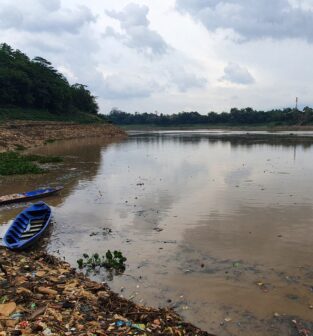 The Irony of the Citarum River