Kingston Harbour, the 7th largest natural harbor in the world, lies within Hunts Bay on the shores of Kingston, Jamaica. Fresh water, along with various industrial and domestic waste, is discharged into Hunts Bay from rivers and drainage gullies, including Rio Cobre and Sandy Gully. The Rio Cobre is one of the largest rivers in Jamaica with an approximate drainage area of 646 km². The Sandy Gully is part of the city drainage system and drains a large area in the upper section of the Kingston metropolitan area, carrying urban runoff into Hunts Bay. Recently, solid waste clogging gullies has become a major concern in Kingston. Gullies blocked by debris have resulted in localized floods and damage to infrastructure. Furthermore, debris accumulating in the mangrove forests can create banks high enough to affect the seawater exchange in and out of the system. Inadequate circulation can result in stagnation or hyper salinity, affecting the flora and fauna of the mangroves. Further offshore in the Carribean, pollution from these waterways threatens coral reefs. Coral reefs are one of the most threatened ecosystems on the planet, and also one of the most important. While they make up less than 0.1% of the ocean, coral reefs are home to more than 25% of the total biodiversity in the ocean. They protect coastal communities from storms and erosion, provide food and medicine, and are important drivers of ecotourism.

The Ocean Cleanup will install an Interceptor system at the heart of the Kingston Harbour near the mouth of Sandy Gully to prevent waste floating from Hunts Bay into the Caribbean Sea. The Interceptor is 100% solar-powered and extracts waste autonomously. It consists of a solid barrier that catches and concentrates debris into a conveyor belt fitted onto a floating pontoon to extract the waste. The conveyor belt distributes the waste over six dumpsters fixed on a barge inside the pontoon that can be taken out of the system to shore for emptying. The pontoon is a steel catamaran construction moored with anchors, piles and chains to the riverbed.

The captured waste will be separated at collection centers in Kingston. Plastics will be sorted, with PET and HDPE items separated, baled, and sold for recycling. The output products are washed flakes that are then re-sold on the open market. In the first phase of the project, non-recyclable plastic and other debris will be dried and transported to the nearby landfill; in the second phase, project debris may be responsibly pre-processed in the cement plant in Kingston for thermal recycling.

Recycling Partners of Jamaica (RPJ) is leading the project’s community engagement through deploying a robust public education program on the importance and value of recycling single-use plastics and HDPEs. RPJ uses traditional advertising, social marketing, and social media to motivate behavior change. Within a national campaign aimed at encouraging citizens and companies to join the recycling movement, there will be specific activities aimed at schools, town criers, and window wipers. The school program will include a school recycling drive, creating eco-wardens in schools, encouraging environment clubs at schools and coordinating competitions. Town criers, window wipers, and Re-Cyclers (on bicycles) will announce the initiative and voice the importance of stopping waste from going into the streams in key areas of the city. The RPJ website will provide the community with regular updates on the plastic waste intervention.

The Ocean Cleanup is a non-profit organization based in the Netherlands developing advanced technologies to rid the world’s oceans of plastic. To fulfill its mission of clean oceans, The Ocean Cleanup is not only addressing the legacy problem of what’s already in the ocean but also aiming to stop new plastic from entering the ocean. Working together with government leaders and private corporations, its goal is to tackle the 1000 most polluting rivers of the world in five years. Recycling Partners of Jamaica is a registered charitable organization and the officially designated National Recycling Entity, formed by public-private partnership with the Government of Jamaica and several private food and beverage companies. Their objective is to support the recycling industry, increase employment and improve the environmental footprint of local businesses and individuals by engaging in an initiative branded Recycle Now Jamaica. They will be responsible for community engagement and operations of the Interceptor in Kingston Harbour. 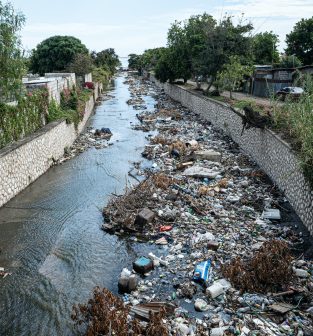 Cleanup and Community: Why locals are key to sustained cleanup